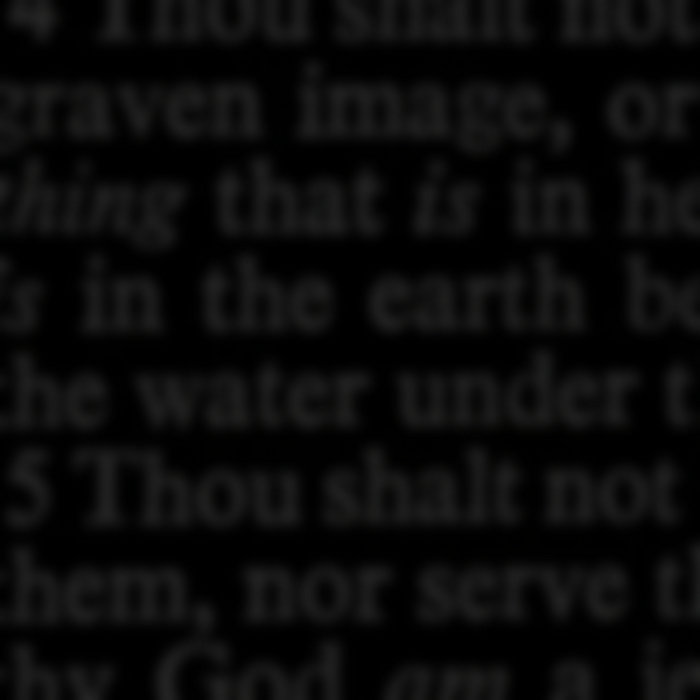 The piece features a recording of the maverick Calvinist minister Arthur W. Pink (1886–1952) reading the second commandment (Ex. 20.4). The first section comprises Pink’s voice and a looped and overlaid guitar part. In the second section, Pink’s delivery is split into two channels, set out-of-phase, and reduced to four statements: ‘image’, ‘graven’, ‘Thou shalt not make unto thee’, and ‘any’. The syntax is further dislocated by a process of audio fracture and collaging: an allusion to the first pair of the tables of the law which Moses broke into pieces when he beheld the iniquity of the gold calf (Ex. 32.19). At the end of the composition there is an evocation of a numinous stasis and coherence – anticipating the renewal of the commandments on the second set of tables (Ex. 34.27–28).

The biblical text is made audible not only by Pink’s voice but also by the application of a systemic process devised by the American composer John Cage (1912–92). It operates by assigning every letter of the alphabet to a note in the C Major scale, so as to permit any text to be converted into musical notation. On this occasion, the palette of notes, here played on guitar, is further delimited by the work’s title: ‘graven image’. The range of letters that make up those words cover 6 of the 7 distinct tones in the C Major scale in Cage’s alpha-notational system. The only tone that is not covered by the words is ‘C’ itself. But as ‘C’ is the scale’s tonic, it is present among the other notes as a conditioning principle (since all the other notes are naturals rather than a sharps or flats).

This is an alternative version of the same composition delivered to the ‘Calvinism and Culture’ conference, Princeton Theological Seminary, Princeton, USA, April 15, 2011. (See 'The Bible in Translation' CD.)

Context: Recorded live at a lecture entitled ‘An Anti-Icon: A Protestant Art Now’ delivered at the Department of Fine Art, University of Calgary, Canada, September 23, 2009.

Source: Sample derived from recordings on an open-access online archive of sermon by A. W. Pink and other ministers, accessed June 2009.