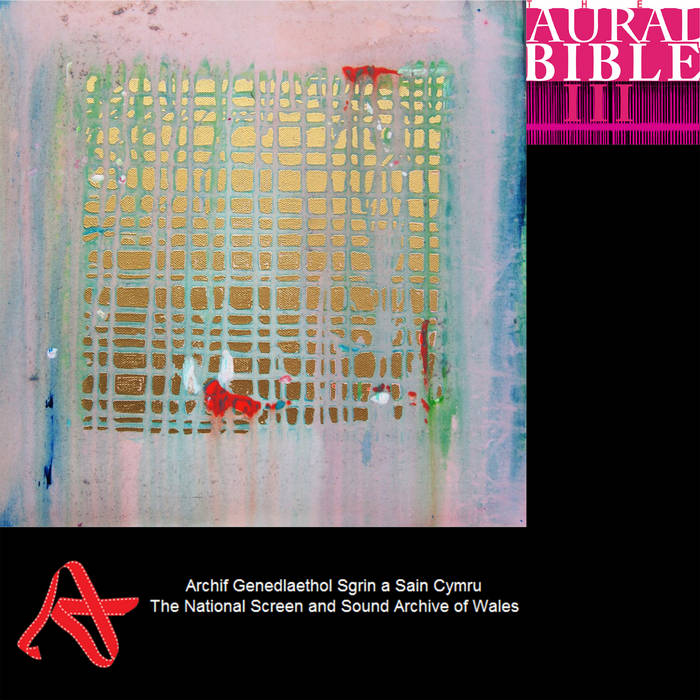 ‘The Remnant that Remaineth’ is the second in an occasional series of sonic encounters with abstract painting.

Siân Brophy introduced herself to me in 2017, out of the blue, around the time that she had begun her ‘Numinous Series’ of paintings. This was to be no chance encounter. To my mind, her paintings are spiritual and metaphysical metaphors for two mysteries, the one almost wholly occluded by the other. They are, too, the residual afterimage of a profoundly ‘visionary’ encounter with something, or someone, ‘ineffably sublime’ (to quote George J. Elvey’s hymn).

In her writings, she has spoken of the artworks as a ‘curtain’. More particularly, within the Christian framework that she now occupies, they summon a veil. In the Israelites’ places of worship – the Tabernacle and Temple of Solomon – a veil (Hebrew: יְרִיעָה [curtain]) separated two other mysteries, the one more sacred than the other: the Holy Place and the Holy of Holies. The image of that veil (Greek: καταπέτασμα [veil or curtain]) is turned metaphor by the writer to the Hebrews to convey the unmediated access that believers have to God as a consequence of Christ’s atoning sacrifice (Hebrews 10.20). They can now pass ‘through’ (Greek: διά). The same word is used in Christ’s maxim: ‘It is easier for a camel to go through the eye of a needle’ (Matthew 19.24).

In both texts, ‘through’ implies a channel or passage into and out of something. The Israelites priests, by contrast, could access the Holy of Holies only by going behind the curtain. The curtain was a piece. This is why the tearing in two of the Temple’s veil at the moment of Christ’s death was such a shocking event (Matthew 27.50–1). It was an act of divine vandalism. The rent in the spiritual veil (procured through Christ’s torn flesh and blood sacrifice) removes any distance or obstacle between us and God. Thereby we may enter into the true sanctuary, that is to say, his presence, favour, and fellowship.

Siân’s paintings are about this ‘throughness’. She allows our vision to pass beyond the ‘Holy Place’ and into the ‘Holy of Holies’ unheeded. We are tantalised by, drawn towards, what, in the tradition of icons, is a golden light (the light of God). The veil appears to melt in the ferocious heat of a pure and unconditional love, grace, mercy, forgiveness, and acceptance that burns from behind it. The informal grid motif recalls the mesh of a gossamer cloth made threadbare, having been pulled apart (rent asunder), through whose warp and weave we can now see what was previously obscured. In this sense, her paintings evoke the prospect of atonement.

The works also summon artistic influences (consciously or not) that include abstract painters such as Morris Louis, Mark Rothko, and Robert Natkin, figurative colourists like Pierre Bonnard, the playful intimacy of Paul Klee, as well as the gravitas and devotional sensibility of Medieval painted icons. These resonances are woven together, like the cross-threads represented in her paintings.

My sonic response to Siân’s painting involved, first, converting a digital image of her work into a sound output, using a rudimentary data-bending technique. From this, I extracted material with which to construct a set of chordal drones. In this way, she, through her work, makes a direct and collaborative contribution to the sound composition, albeit under my supervision. The drones’ sonorities were subsequently enlarged, both harmonically and spatially. Thereafter, I superimposed them, in acknowledgement of the manner by which Siân has overlaid the thin veils of pigment on her canvases. Thus, the completed composition is not only a sonic response to the painting but also a sonification of the painting by the painting.

The composition reflects not so much the painting’s structure as its stasis, presence, and evocation of something utterly remarkable and heartfelt. My work is, unashamedly, an emotional response to hers. On a first audition, little appears to change throughout the course of its 16–minutes duration. Subsequent auditions, however, reveal a fabric woven with a multitude of tonalities, harmonies, amplitudes, and spatial movements, all of which are constantly shifting and settling.

The title of the composition is taken from Exodus, chapter 26, and verse 12. It refers to an instruction given to the Israelites regarding the goats’ hair curtains of the Tabernacle. The half curtain that remained was to be hung over the back and west side of the tent. Nothing was to be wasted. The composition is itself a residue: a vestigial after-image of an extraordinary correspondence that had once flourished and faded.

For my 'little sister'.

'The Remnant that Remaineth' is an adjunct to the third release in The Aural Bible series. The series deals with the Judaeo-Christian scriptures as the written, spoken, and heard word. It explores the cultural articulations and adaptations of the Bible within the Protestant tradition. The works on the album embark upon a critical, responsive, and interpretive intervention with aspects of its sound culture. The websites that accompany the series’ CD albums are dynamic. Material will be added, and sub-sections fleshed-out, as opportunities for the work to be presented, discussed, reviewed, and broadcast present themselves.