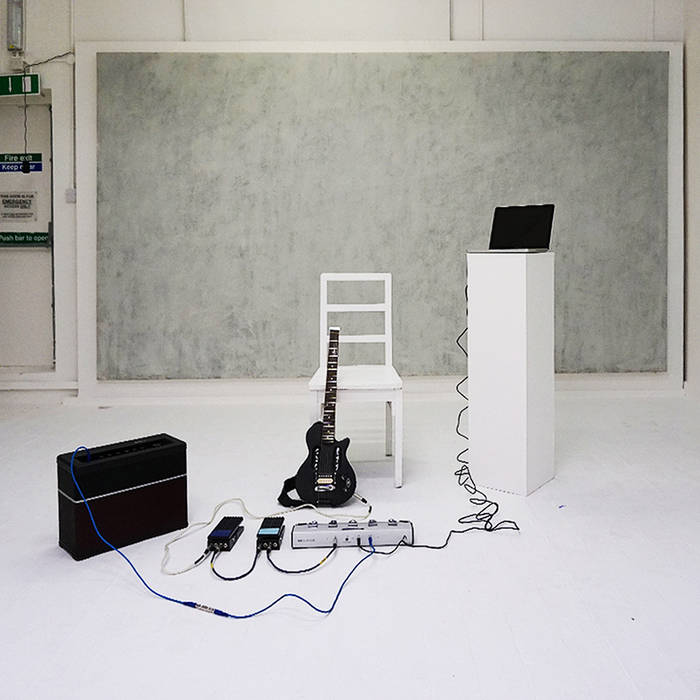 ‘Strictly No Admittance’ is the first in an occasional series of sonic encounters with abstract painting.

On the occasion of this recording, the painter, Sandra Sagan, was present only through their work; I was present, in situ. The event had no audience; the process of musical composition required solitude and an uninterrupted presencing of mind on my part.

I’d observed Sandra’s paintings for the past four years at the School of Art, Aberystwyth University, where she and I worked in our respective roles as tutee and tutor. ‘Suspension’ (the title of her second MA Fine Art exhibition) represents both a display of individual painting and an installation of such that was responsive to, and collaborative with, the exhibition space.

The room was hung with seven paintings: two were placed vertically on the floor, back to back; two more were affixed to walls at right angles one to another; two more were situated at right angles, with one attached to a wall and the other suspended from the ceiling; and a further painting placed on the wall, in isolation. The room was illuminated by only a low luminosity, cool ambient light emanating from behind and above the mounting boards. The visual impression, within the otherwise white interior, was akin to the perpetual onset of dusk.

Sandra made her paintings to music. I wanted to make music to her paintings. Her artworks were essentially neo-minimalist in orientation: non-hierarchical surfaces comprising brushed layers of neutral, high-key coloured oil paint, into and onto which lines and other residues of autography were inscribed, like the trace of a skater’s blades upon the ice.

My approach was to, as far as possible, create an analogical equivalent in sound for the scale and ratio of the support, the abrupt edges of the pictorial boundary, the paintings’ tonality and colouration, and the processes of superimposition, gesturalism, and mark making that characterized her work. The recording was made in situ, over two hours and at night, in order to facilitate a direct response to not only the paintings but also their context.