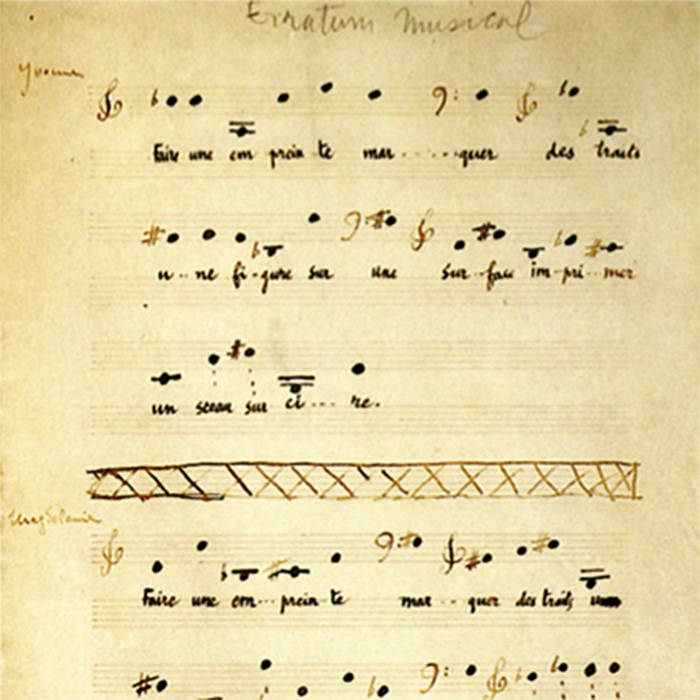 Marcel Duchamp (1887–1968) was one of the most important visual artists of the twentieth century: the father of Dada, minimalism, conceptualism, and performance art, among other movements. He was also one of the pioneers of what would become sound art. In 1913, Duchamp developed three musical pieces of which ‘Erratum Musical’ is the most complete. The title translates into English as ‘Musical Misprint’. Like the titles to Duchamp’s readymades, which he began two years later, it is a non sequitur. The piece was originally scored for three voices – those of Duchamp and his two sisters – and first performed at his family home in Rouen at New Year, 1913. Each performer randomly picked notes from a hat, the number and range of which matched their vocal (singing) span. The notes were sung in the order they had been chosen. The lyric to the song is taken from a dictionary definition of the French word ‘imprimer’ (Eng. ‘to make a print’).

‘Erratum Musical’ was conceived the year after the American composer John Cage (1912–92) was born, and 30 years before he made his own contribution to aleatoric music. 2013 marked the centenary of Duchamp’s composition. I wanted to honour the occasion by arranging ‘Erratum Musical’ for three electric guitars or, rather, for one electric guitar with two delayed signal outputs. Accordingly, the guitar sounds an initial note, which note is heard again three seconds later (delay 1), and again a further three seconds after that (delay 2). The delayed signals are, in effect, copies or sonic prints of the original sound. In this way, the subject of the lyric is preserved.

The surviving musical score for ‘Erratum Musical’ has no key signature, time signature, or bar lines; no indication of the duration over which each note was sung; and no instruction regarding the speed and dynamics of the delivery. In this sense, the piece is only partially composed: it requires the performer to complete it. What is not specified is open to interpretation. Consequently, the performance could either be over in a matter of seconds or strung out for very long time. Likewise, it can be played brashly or subtly, loudly or softly, or using a combination of all these characteristics. There is enormous latitude for invention.

For this recording I have used a 22-fret the electric guitar. It provides almost four octaves, or 47 notes, ranging from the E below middle-C to D three octaves above. The value of each note was written on a playing card. The 47 cards were then shuffled and cards selected from the top of the pack in the following order:

In the above mode of notation, the initial figure represents the numerical order in which the note is played; the figure in square brackets is the ‘key number’ in relation to the 88 notes on a pianoforte; and, finally, the letter/figure pairing is the ‘scientific’ name (the note value and its octave) in the Helmholtz pitch system.

The guitar signal is passed through distortion, modulation, and synth pedals and on to two independent delay units arranged in parallel to produce three sequential, sustained, and overlapping notes played in series. The mood of the piece is pensive, dark, and foreboding. A year after ‘Erratum Musical’ was first performed, the First World War broke out.

All compositions ℗ and © 2014 Marcel Duchamp and John Harvey