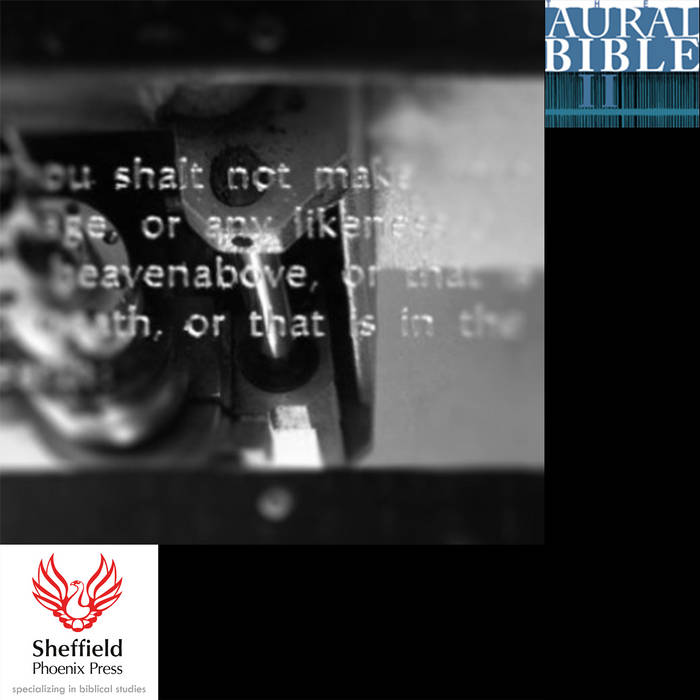 This suite of works was conceived as a sound illustration for my book 'The Bible as Visual Culture: When Text Becomes Image' (Sheffield: Sheffield Phoenix Press, 2013). 'Graven Image II’ is based on the principal clause from the text of the second commandment: 'Though shalt not make unto thee any graven image, or any likeness of anything that is in heaven above, or that is in the earth beneath, or that is in the water under the earth' (Exodus 20.4).

The term ‘graven’ is an approximation of the Hebrew word ‘pesel’, which means ‘to cut or ‘to hew into shape’. The English translation ‘graven’, as it was understood by the Bible translators in 1611, is a fairly anodyne term which means ‘engraved’, and this is the rendering I have followed. The text was mechanically engraved upon a metal matrix by a commercial plaque make. However, it was not the image of the engraved text that I was interested in but, rather, the sound that the machine made as it incised the text. This sound formed the basis of the audio artefact. In contrast to the scripture-based visual artefacts that I have produced, in which the text is converted into a continuous letter strand, 'Graven Image II' articulates not only the text’s letters but also the words, punctuation, and the spaces between them that contribute to the aesthetic character of the artefact: the alternation of noise and relative silence creates a ready-made audible, if somewhat manic and irregular, percussive accompaniment.

The auditory material is split, stereophonically, into two signals which are set out of alignment to create an auditory double image. The doubling of the sound source has both a theological and a visual precedent. In the Jerusalem Talmud, Rabbi Hanina ben Gamaliel says that the commandments were written five on one tablet and five on the other. In Protestant churches, the Mosaic tablets were represented in the form of a pair of law boards set up in churches in the place of images. Similarly, each board had five commandments, or else one board bore all ten and the other the Lord’s Prayer or the Beatitudes. The engraving sets the main clause of the commandment in five lines, each—with the exception of line 5—consisting of between 33 and 35 characters (the arrangement is determined by the size of the matrix and the font):

The two signals are dislocated progressively, line by line, by period of delay of ±100 milliseconds. The table shows the value for the left signal (+), the right signal (-), and the total temporal dislocation of the source (=):

The decision was constrained by the principle of numerical economy: the use of 2 as a value refers to the second commandment, while the use of 10 as a number base (multiplied by itself to form units of 100) alludes to the Decalogue at a whole, which is also connoted by the final time period for the total dislocation of the source at line 5: 10 × 100 milliseconds.

The sound source presents itself as five distinct blocks of noise (which can be seen by clicking on the title for each track) corresponding to the five lines of text as they are arranged on the plate. The periods of relative quiet at the beginning and end of each block represent the equivalent of a typewriter’s carriage return, as the engraving tool—having completed the last letter of one line—moves backwards and downwards to begin the first letter of the next line.