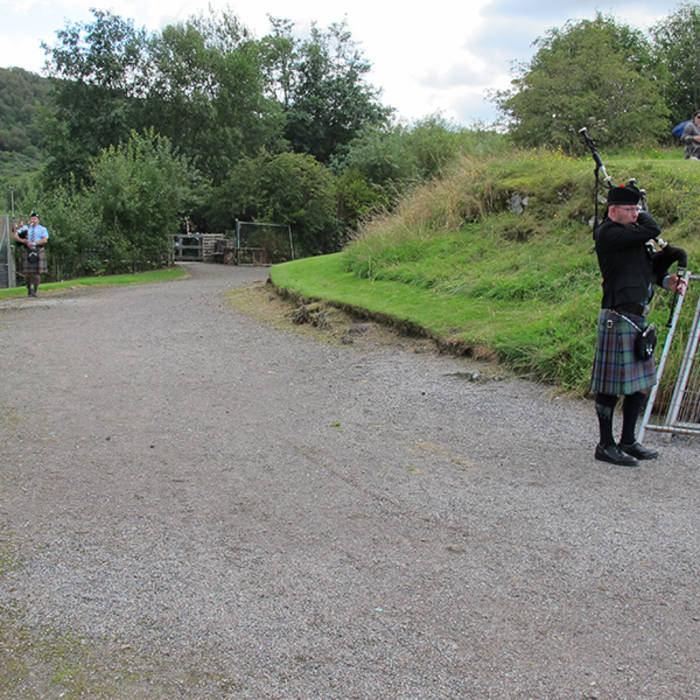 The source recording was made at the Argyllshire Gathering of the Oban Highland Games, Scotland. It features the sound of two senior contestants for the piobaireachd (literally: pipe playing) championship. The music of piobaireachd consists of a theme or ‘ground', which is repeated, varied, and played in different patterns (often slowly), around which the bagpiper improvises.

During the day of the games, each piper practices the test piece in readiness for its performance before a panel of judges. It is not unusual to hear several rehearsals taking place simultaneously in different parts of the competition field. Each of the soloists plays concentratedly and in isolation, largely oblivious to (and sometimes out of ear-shot of) the efforts of their fellow competitors. Consequently, the casual audient hears a collage of separate renderings of essentially the same piece of music, none of which are synchronous – each being begun and ended at different times to, and played more quickly or slowly and more or less elaborated with musical flourishes, grace notes, and ornaments than, the others.

The album’s two compositions focus upon this phenomenon of desychronicity in relation to a pair of pipers (shown in the album cover photograph) who were playing to my left and right at one corner of the field. The systems or methods used to explore the source recording are outlined under the ‘info’ section of each track.

Often, pipers rehearse the test piece faster than they play it in competitive performance. Here, the speed of their playing is reduced two and half times in order to establish a stately pace and the mood of a doleful lament associated with the slowest renderings of piobaireachd.